I love odd, funny, plotless, personal books, and have just finished reading one of the best I’ve ever encountered.


Autonauts of the Cosmoroute, by Julio Cortázar and Carol Dunlop, was first published in 1983 in Spanish, but for some reason no English translation appeared at the time. It has now very belatedly been translated, by Anne McLean, and published in the UK by Telegram. 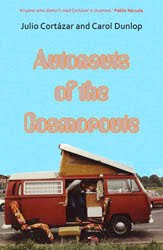 Julio Cortázar is a novelist and short-story writer I had never read before. (I will now.) He wrote somewhat Borgesian tales and fables, I think. But this book is different. It relates a journey he made with his partner Carol Dunlop from Paris to Marseilles in May 1982: a straightforward journey down a single motorway – but with one catch. Driving in a VW camper van, they stopped at every single rest area on the way, alternating between one stop for lunch, and one stop overnight. Thus, they travelled only the distance of two rest stops per day, and it took them a month to get to Marseilles. All month, they never allowed themselves to leave the weird interzone of the Autoroute du Sud. Friends brought them fresh vegetables and fruit every so often, so they wouldn’t get scurvy. Otherwise they lived on service-station food, with the occasional motel stop. Then, together, they wrote a book about it.

The journey was a piece of performance art, really, but it has nothing pretentious about it. If done by someone like Baudrillard, it would have been posy, and it would contain meditations on the philosophical meaning of it all. Instead, it is simply funny and charming. The pages are filled with photographs, mostly of the couple themselves and of their camper van, whom they called Fafner after Wagner’s dragon. They also write about – and photograph – their hideous folding picnic chairs, the “florid horrors”. We see the strange flora and fauna they meet in the rest areas, and meet other travellers, who eye them suspiciously. Every so often, we get an imaginary letter from a woman who – the couple fantasize – travels regularly on the motorway, and who gradually realises that she is seeing the same peculiar couple at a different spot every time. Surely they are not living on the motorway, wonders the woman? Are they ghosts? Have they been there forever? Will they ever leave?

The best character is Fafner, who disports himself in the book regularly, sometimes with his dragon-crest in full flare (that is, with his tent-roof up), or his wings flapping (doors open), or adorning his sides with shadows (parked under a tree in sunlight), or allowing himself the indignity of being draped with laundry. I have my own reasons for being attached to VW vans, so perhaps that’s why I like it.

The book could so easily have gone wrong, but it is gentle and charming, and in its own way it does offer a form of philosophy. Its philosophy is never to philosophise, but simply to observe the little things, to let your imagination go, and to have fun. It is also an ode to companionship. The story is given a poignant twist by a revelation at the end about one of the two travellers. (The two human ones, that is. Fafner is clearly a traveller too, and even the florid horrors seem to be having a laugh.)

It is much less like a Baudrillard book than a novel by Jerome K. Jerome. This is a daft, perverse, companionable trip done purely for its own sake; a pilgrimage whose only goal is itself. It goes immediately into my list of favourite books: the sort I will read again and again, and which I wish I had thought of writing myself.
Posted by Sarah Blogwell's Bake at 11:59 AM 1 comment:

“Our life is composed, like the harmony of the world, of contrary things, also of different tones, sweet and harsh, sharp and flat, soft and loud. If a musician liked only one kind, what would he have to say? He must know how to use them together and blend them.” Montaigne, "Of Experience".
Posted by Sarah Blogwell's Bake at 11:11 AM 2 comments:

I've started tweeting Montaigne quotes - follow them here.  I'll add one whenever one comes to mind, and, of course, whenever I can fit it into the 140-character limitation.  I'm aware that nothing could be less Montaignean than to think you can express something in a 140-character soundbite and be done with it.  A lot of those characters would be needed just for adding his typical codicils to any opinion - things like, "Or perhaps not", "but I don't know", and "I might be wrong".

I'll try to make up for this by selecting tweets that are as inconsequential, contradictory, and generally untidy as possible.
Posted by Sarah Blogwell's Bake at 1:35 PM 5 comments: 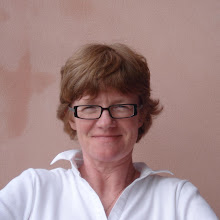